Previous Event
Event 25 of 35
Next Event 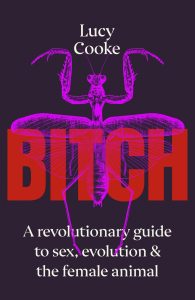 Bitch: A Revolutionary Guide to Sex, Evolution and the Female Animal

What does it mean to be female? Mother, carer, the weaker sex? Think again, counters Lucy Cooke in her ground-breaking book Bitch. Turning our assumptions on their heads, the award-winning broadcaster and filmmaker demonstrates how the female of the species has for too long been marginalised and misunderstood by the scientific patriarchy.

Illustrating her thesis with marvellous surprises, such as diplomatic alpha female bonobos, post-menopausal orca matriarchs and sex-switching reef fish, Cooke dismantles a mass of misconceptions about binary sex roles. Darwin, Cooke claims, first cast the female as a Victorian housewife: passive and coy, and submissive by default. Bitch tells an empowering story of females – animal and human – who are redefining not just ideas about the female of the species but about the very forces that shape evolution.