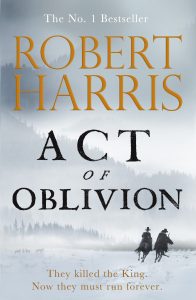 Act of Oblivion
In conversation with William Waldegrave

Found guilty – but can’t be found. The pair accused of the murder of Charles I have fled, sparking the biggest manhunt of the age with pursuer and pursued hurtling headlong across continents in a chase that takes them halfway round the world. Robert Harris is a master storyteller whose insight and eye for detail have made him one of the most successful novelists of the 21st century.

With a unique ability to combine historical accuracy with nail-biting suspense, he has 14 best-selling novels to his name, many of them adapted for the screen. From BBC journalist to political editor of the Observer to full-time author, Harris has an unrivalled knack of bringing the past to life with distinctive aplomb.

A thrilling close to our 30th Anniversary Festival!